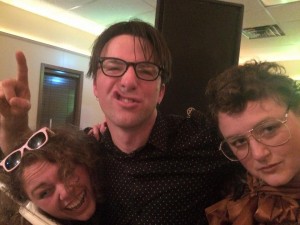 New Year’s Eve has come and gone, but we want to say Thank You to everyone who chose to spend it with us at the Port Hope Lion’s Centre. By December 21st the event had sold out and with only a few days left before the show, people were scrambling to find tickets. We got the OK from the venue to release another 50 tickets on the afternoon of the 22nd and they sold out in 3 hours! The final 10 tickets were given away live on the air at Northumberland 89.7 FM on the morning of the 29th. An additional 40 people also managed to sweet talk their way in through our lax (I mean overly sympathetic) door staff at the door.  It was a fantastic night for the band watching a crimped-hair, acid washed, and parachute pants-clad audience leaving their reality to travel back to the 1980’s with us, dancing the night away.

A very special THANK YOU goes out to Michelle, Jenn, Crystal, Heather, and Ashley for donating their time and efforts decorating the hall and doing the door, and a very,  very special thanks to Kelli at The Beamish House for preparing such a huge bounty of food for everyone.  LETS DO IT ALL AGAIN NEXT YEAR!